My favorite artist is NICK CAVE he taps into your emotions and his work is beautiful and colorful and the truth comes from the message and how all of this began – a bit political for sure  – he makes you think – he makes you want to rally – he makes you want to march –  we are such a community & we are all equal and we all need to help one another …. I love Nick Cave’s messages and I thank him and the Park Avenue Armory for this incredible installation THE LET GO

Interdisciplinary artist Nick Cave creates a dance-based town hall—part installation, part performance—to which the community of New York is invited to “let go” and speak their minds through movement, work out frustrations, and celebrate independence as well as community. The reimagined Wade Thompson Drill Hall allows for social gatherings and is activated by “chase,” a multi-colored, 100-foot-long mylar sculpture that glides across the dance floor. 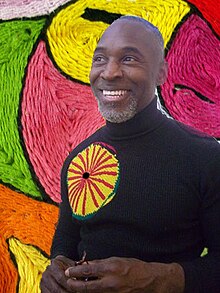 Nick Cave (born February 4, 1959[1] in Fulton, Missouri, United States) is an American fabric sculptor, dancer, and performance artist. He is best known for his Soundsuits: wearable fabric sculptures that are bright, whimsical, and other-worldly. He also trained as a dancer with Alvin Ailey.[2] He resides in Chicago and is director of the graduate fashion program at School of the Art Institute of Chicago.

Soundsuits are sculptural costumes enveloping the wearer’s body in materials including dyed human hair, sisal, plastic buttons, beads, wire, sequins, and feathers. In using everyday objects, Cave can create an atmosphere of familiarity while rearranging them into interpretive representations of both social and material culture.[6] As race, identity, and gender are generally accepted to form the axis of his work,[6] Cave’s soundsuits can telegraph many concepts simultaneously. Their meaning can therefore change based on their environment, movement, fixed state, and/or the inclusion of group choreography.[6][7] The finished pieces bear some resemblance to African ceremonial costumes and masks. The suits also reference carnival costumes, Dogon costumes, Rococo, and ball culture.[1]

Cave’s first soundsuit was created in 1992, as a reaction to the beating of Rodney King. Cave collected a large number of sticks and twigs from the ground and fashioned them into a suit that made sound when worn.[1] His suits are most often presented for public viewing as static sculptures, but also through live performance, video, and photographs.[8][9] Bringing his interactive creations to life, “Cave regularly performs in the sculptures himself, dancing either before the public or for the camera, activating their full potential as costume, musical instrument, and living icon.”[10] Cave has produced over 500 soundsuits, since the creation of his first in 1992.