Do you know May is almost here and it is Clean Air Month !

I recently started reading up on air quality and with 2 dogs it is so important to have clean air around me so when I heard about IQAir Atem I was intrigued.

IQAir’s vision is to assist people in living longer, healthier and more productive lives by helping them breathe the cleanest, healthiest air possible. This vision has guided the company since its founding in 1963, and can be seen clearly today by the way IQAir interacts in the world, and the values that we hold closely.  I learned how clean air is important for your brain function so important if you have little kids in the house.

I gave it a try and I have to admit I felt like the air was cleaner like almost when you are outside and you can take a deep breathe – it wasn’t extremely noticeable like that but it definitely just felt good running the ATEM and knowing what I was doing to protect my home. Below is info on the ATEM my own personal clean air zone creator & Air Visual Pro as well.

A revolution in air purification : Create your personal clean air zone with the IQAir Atem

They also have their own app which works pretty cool with this personal air purifier. Unlock extra features for your Atem with the app. Sync your mobile device and you can turn your Atem on and off, as well as control the fan settings.  To save energy and preserve filter life, the proximity sensor signals your Atem to turn off when you walk away.

Learn everything here – love this video because it explains how it works in depth:

Btw I loved their blog / newsroom lots of important facts loved this article :

I also tried  which is amazing to have in your home for a number of reasons !

The first step to improving the air we breathe is knowing what we breathe, where it comes from and how it can be improved.

Breathe healthy air wherever you go by following the AirVisual Pro’s quick fix tips, learned from your environment and habits 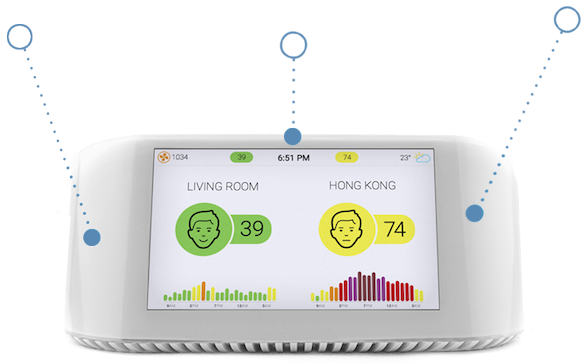 PM2.5 are tiny particles that damage your throat and lungs. This pollutant is particularly dangerous as its small size allows particles to directly enter your bloodstream from your lungs.

See your indoor air quality next to outdoor readings from the nearest official monitoring station.

Plan ahead to minimize pollution exposure and discomfort outdoors. We’ll keep you informed with air quality and weather data up to 3 days in advance.

Make sure your environment is comfortable, as well as healthy.

With all of that known above — I heard about  this book and started taking some notes on the facts – I hope to learn a bit more about what you can do to protect your home but know starting with the excellent group of IQAIR I took some steps to a healthier AIR in my home !

is determined to help educate the world so people can learn more about what’s in the air they are breathing, start protecting their health and help make our air cleaner!

What is clean air? – Clean air is air that does not contain, harmful levels of pollutants such as carbon monoxide, lead, nitrogen dioxide, ozone, particulate matter and sulfur dioxide.

What can you do to help? – According to the American Lung Association, some ways to help pollution in your community include; using less electricity, driving less, not burning trash or wood, and ensuring your local school system requires clean school buses.

According to the EPA below are some of the common, harmful pollutants in the air we breathe.

Ozone – Tropospheric, ground level or “bad” ozone, is not emitted directly into the air, but is created by chemical reactions between oxides of nitrogen (NOx) and volatile organic compounds (VOC) in the presence of sunlight. Occurs when pollutants emitted by cars, power plants, industrial boilers, refineries, chemical plants, and other sources chemically react in the presence of sunlight. Ozone at ground level is a harmful air pollutant, because of its effects on people and the environment, and it is the main ingredient in “smog.” It’s most likely to reach unhealthy levels on hot sunny days in urban environments, but can still reach high levels during colder months. Ozone can also be transported long distances by wind, so even rural areas can experience high ozone levels.

Particulate Matter – (PM) is the term for a mixture of solid particles and liquid droplets found in the air. Some particles, such as dust, dirt, soot, or smoke, are large or dark enough to be seen with the naked eye. Others are so small they can only be detected using an electron microscope. These particles come in many sizes and shapes and can be made up of hundreds of different chemicals. Some are emitted directly from a source, such as construction sites, unpaved roads, fields, smokestacks or fires. Most particles form in the atmosphere as a result of complex reactions of chemicals such as sulfur dioxide and nitrogen oxides, which are pollutants emitted from power plants, industries and automobiles.

Health Effects? Small particles less than 10 micrometers in diameter pose the greatest problems, because they can get deep into your lungs, and some may even get into your bloodstream. Exposure to such particles can affect both your lungs and your heart. Numerous scientific studies have linked particle pollution exposure to a variety of problems, including: premature death in people with heart or lung disease, nonfatal heart attacks, irregular heartbeat, aggravated asthma, decreased lung function, increased respiratory symptoms, such as irritation of the airways, coughing or difficulty breathing.

Carbon Monoxide  – (CO) is a colorless, odorless gas that can be harmful when inhaled in large amounts. CO is released when something is burned. The greatest sources of CO to outdoor air are cars, trucks and other vehicles or machinery that burn fossil fuels. A variety of items in your home such as unvented kerosene and gas space heaters, leaking chimneys and furnaces, and gas stoves also release CO and can affect air quality indoors.

Health Effects? Breathing air with a high concentration of CO reduces the amount of oxygen that can be transported in the bloodstream to critical organs like the heart and brain. At very high levels, which are possible indoors or in other enclosed environments, CO can cause dizziness, confusion, unconsciousness and death.

Lead – Lead is a naturally occurring element found in small amounts in the earth’s crust. While it has some beneficial uses, it can be toxic to humans and animals causing of health effects. Sources of lead emissions vary from one area to another. At the national level, major sources of lead in the air are ore and metals processing and piston-engine aircraft operating on leaded aviation fuel. Other sources are waste incinerators, utilities, and lead-acid battery manufacturers. The highest air concentrations of lead are usually found near lead smelters.

Health Effects? Once taken into the body, lead distributes throughout the body in the blood and is accumulated in the bones.  Depending on the level of exposure, lead can adversely affect the nervous system, kidney function, immune system, reproductive and developmental systems and the cardiovascular system.  Lead exposure also affects the oxygen carrying capacity of the blood. The lead effects most commonly encountered in current populations are neurological effects in children and cardiovascular effects (e.g., high blood pressure and heart disease) in adults.  Infants and young children are especially sensitive to even low levels of lead, which may contribute to behavioral problems, learning deficits and lowered IQ.

Sulfur Dioxide – (SO2) is one of a group of gases called sulfur oxides (SOx). SO2 results from the burning of either sulfur or materials containing sulfur. The largest source of SO2 in the atmosphere is the burning of fossil fuels by power plants and other industrial facilities. Smaller sources of SO2 emissions include: industrial processes such as extracting metal from ore; natural sources such as volcanoes; and locomotives, ships and other vehicles and heavy equipment that burn fuel with a high sulfur content.

Health Effects? Short-term exposures to SO2 can harm the human respiratory system and make breathing difficult. Children, the elderly, and those who suffer from asthma are particularly sensitive to effects of SO2. SO2 emissions that lead to high concentrations of SO2 in the air generally also lead to the formation of other sulfur oxides (SOx). SOx can react with other compounds in the atmosphere to form small particles. These particles contribute to particulate matter (PM) pollution: particles may penetrate deeply into sensitive parts of the lungs and cause additional health problems.

Nitro Dioxide – (NO2) is one of a group of highly reactive gases known as oxides of nitrogen or nitrogen oxides (NOx). NO2 primarily gets in the air from the burning of fuel. NO2 forms from emissions from cars, trucks and buses, power plants, and off-road equipment.

Health Effects? Breathing air with a high concentration of NO2 can irritate airways in the human respiratory system. Such exposures over short periods can aggravate respiratory diseases, particularly asthma, leading to respiratory symptoms (such as coughing, wheezing or difficulty breathing), hospital admissions and visits to emergency rooms. Longer exposures to elevated concentrations of NO2 may contribute to the development of asthma and potentially increase susceptibility to respiratory infections. People with asthma, as well as children and the elderly are generally at greater risk for the health effects of NO2. NO2 along with other NOx reacts with other chemicals in the air to form both particulate matter and ozone. Both of these are also harmful when inhaled due to effects on the respiratory system.