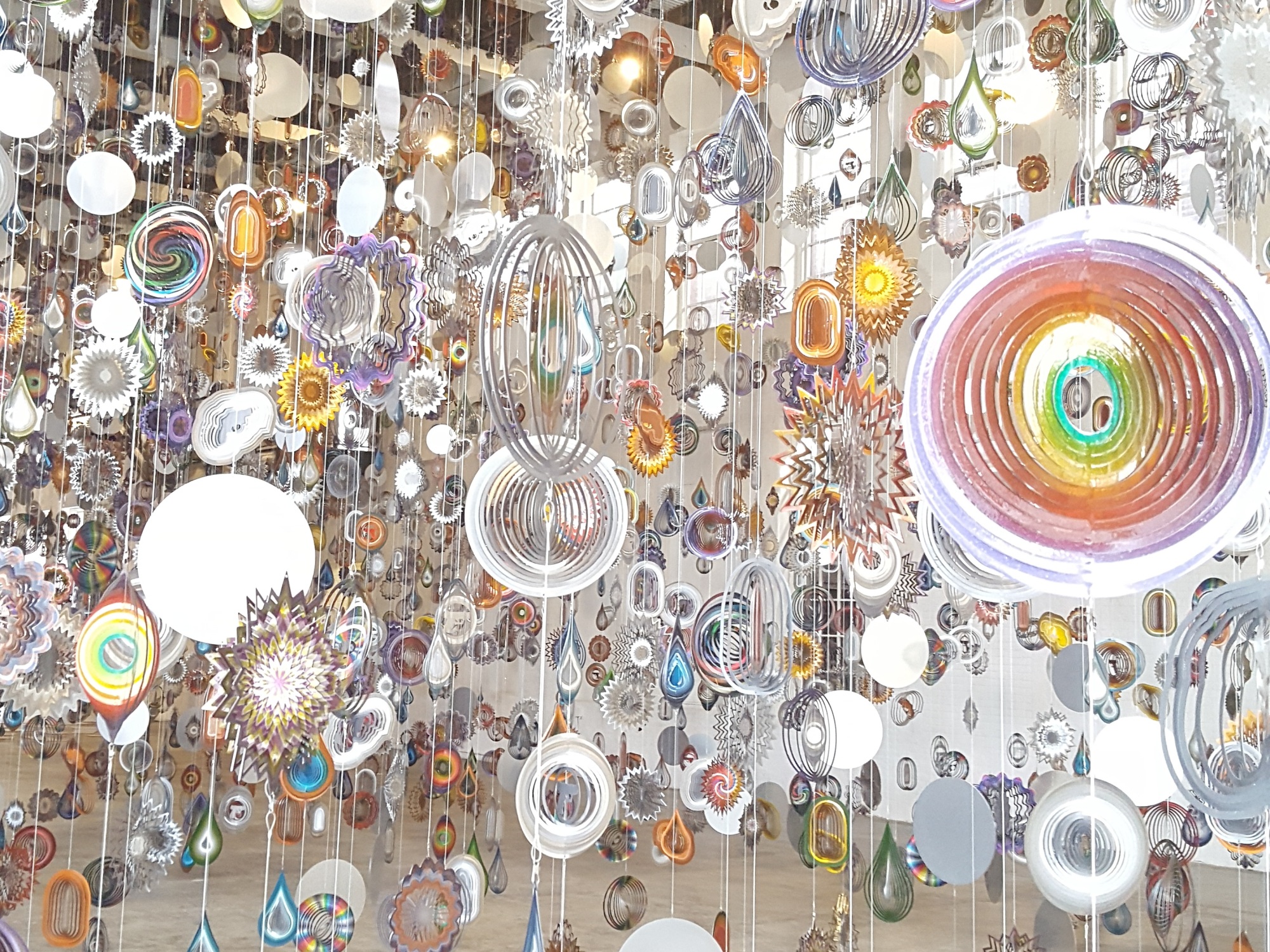 Mass MoCA exceeded everything I thought I would see – it was incredibly magical and the building itself incredibly designed – it was a wonderful experience – I plan to write more but wanted to get some info up asap so others might be inspired to take a trip to North Adams asap to see all of this incredible work. There is a lot to see so you want to give yourself a few hours to go through it all and also time to explore the grounds surrounding the building.  I hear an expansion is coming and they host these incredible festivals there – you can go on their website to learn more.

MASS MoCA is one of the world’s liveliest centers for making and enjoying today’s most evocative art. With vast galleries and a stunning collection of indoor and outdoor performing arts venues, MASS MoCA is able to embrace all forms of art: music, sculpture, dance, film, painting, photography, theater, and new, boundary-crossing works of art that defy easy classification.

MASS MoCA helps artists and their supporters create and show important new work, bringing to our visitors bold visual and performing art in all stages of production, creating a stimulating center of creativity and commerce that brings life and economic vibrancy to its region. http://massmoca.org/about/ 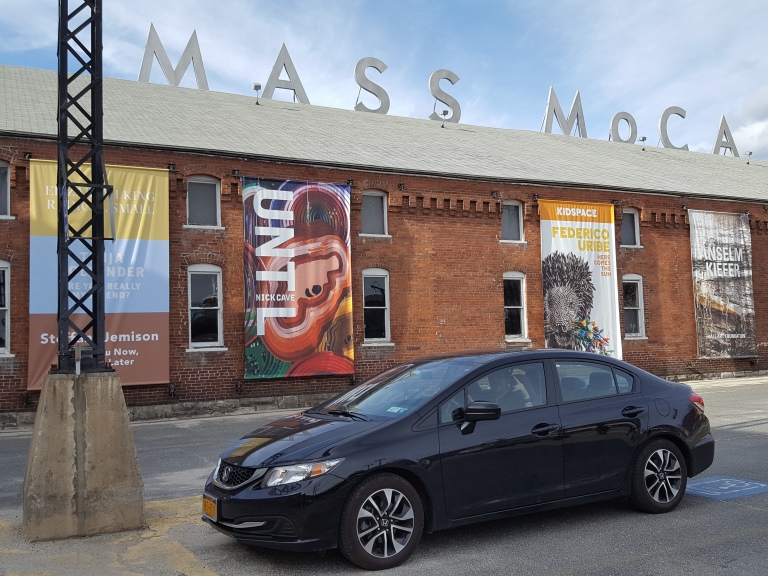 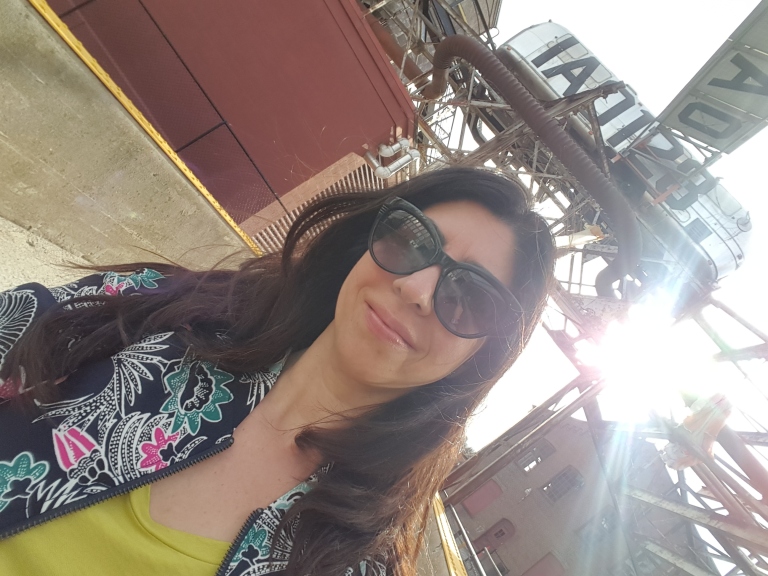 To start on some of the artwork and unfortunately we did not get to see it all… At MASS MoCA, Takenaga’s pared-down landscape of earth and atmosphere is painted in grays and blues that the artist likens to the quality of light at dusk. In her words, the moody palette—punctuated with the artist’s signature burst of high color—conveys “the violet hour of in-between time when the land and sky start to blur.” A horizon line situated high in Takenaga’s composition places the viewers’ perspective floating above the ground, suggesting an expanse of plain stretching out before them. Repeated lines of white dots radiate out in all directions from an implied vanishing point on the horizon line, like blooming crops, a snowy blizzard, or a star-filled sky. The single image is repeated twelve times along the length of the wall. The composition’s receding lines and diminishing dots of classical one-point perspective alternately move backward toward the horizon, and forward toward the viewer. The long horizon is interrupted by diamond-like shapes formed by the intersection of lines at the seams between each image. As viewers walk the length of the wall, the chain of images functions like a series of film stills, implying movement and the rhythm of time. The result is a tension-filled composition that emphasizes both the flat surface of the wall and an illusion of depth. Adding even more dimension to the work, together with a sense of the artist’s hand to the digitally reproduced image, Takenaga hand-applied iridescent paint to the wallpaper surface.

Federico Uribe I love this artist I first saw his work at ART BASEL and I am a huge fan of this creative genius.

Kidspace opened Here Comes the Sun, Colombian-born, Miami-based artist Federico Uribe’s magical, colorful, and sculptural menagerie of animals. In tandem, Chicago-based artist Nick Cave wrapped the Kidspace ArtBar in a graphic Kaleidoscopic Playground, a participatory art-making lab inviting visitors to explore their senses, emotions, and self. Both artists shape-shift feelings of sorrow, rage, and despair into positive, immersive environments, with Kidspace becoming a vehicle for dialogue and exploration about the role of joy and optimism.

Optimism might not be the first quality to come to mind when viewing the everyday materials that Federico Uribe repurposes for his animal sculptures. Colorful shotgun casings and golden varying caliber bullets are brought together to form a lion, for example; leather sneakers are arranged into a leaping puma, and an army helmet becomes a turtle’s shell. In an interview, Uribe underlines the irony inherent in his choice of materials: “People kill animals to make shoes; I make animals out of shoes.” One might then think that Uribe intends to alert viewers to the senseless killing of animals. But, instead, Uribe aims to use ordinary and sometimes provocative materials to challenge associations; the goal is against the grain and utopian—or, as he says, to “make people happy”—in spite of preconceived connotations.

Uribe fills roughly 2,000 square feet of space with his majestic animals to create an installation bursting with joy from the moment visitors enter the gallery. Optimism is apparent in Uribe’s mind­set, and he expresses it visually as part of his artistic vocabulary, transforming objects from their original (often utilitarian or dangerous) purpose to create an environment that is boldly beautiful.

Born in Bogotá, Colombia, in 1962, Federico Uribe currently lives and works in Miami. Uribe studied art at the University of Los Andes in Bogotá and, in 1988, he traveled to New York to pursue an MFA degree under the supervision of Luis Camnitzer. After receiving his degree, he left New York to study and work in Cuba, Mexico, Russia, England, and finally Miami. His work has been exhibited at art institutions such as the Chelsea Art Museum, New York, and the Art Museum of the Americas, Washington, DC. He is represented by Adelson Galleries. 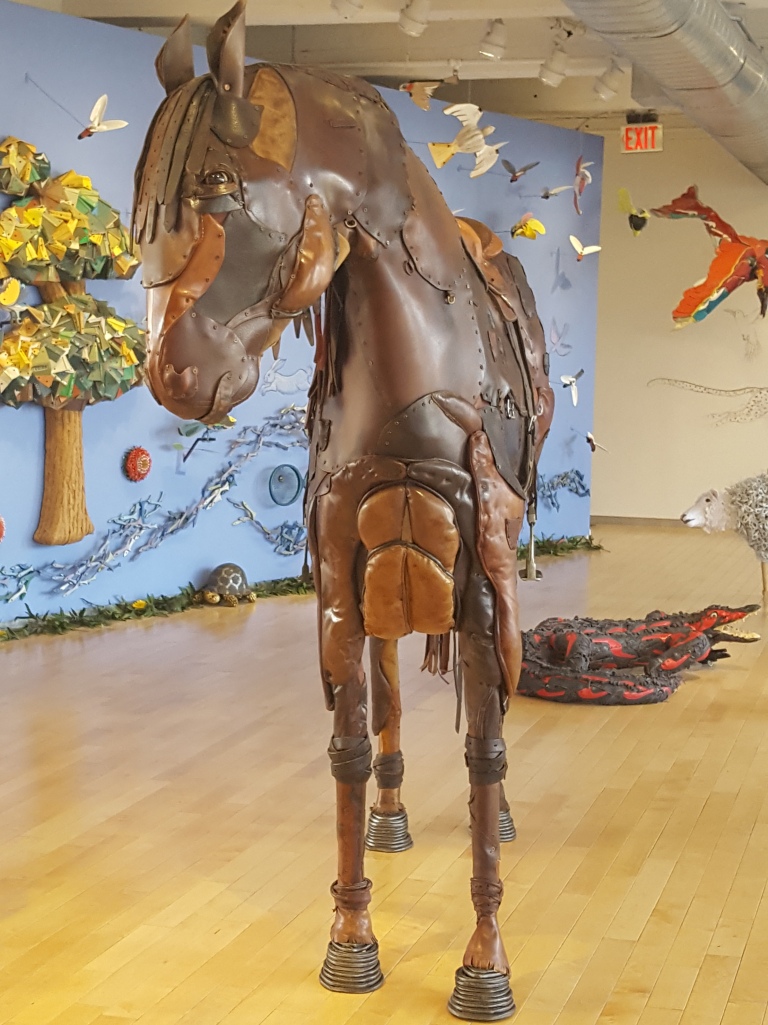 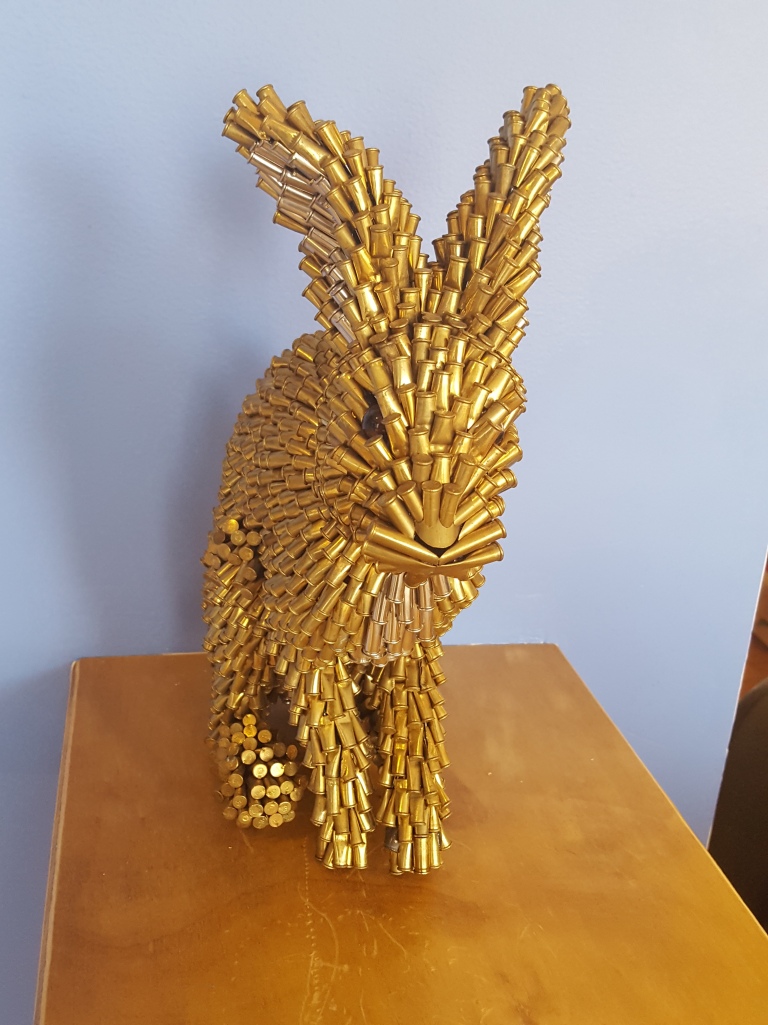 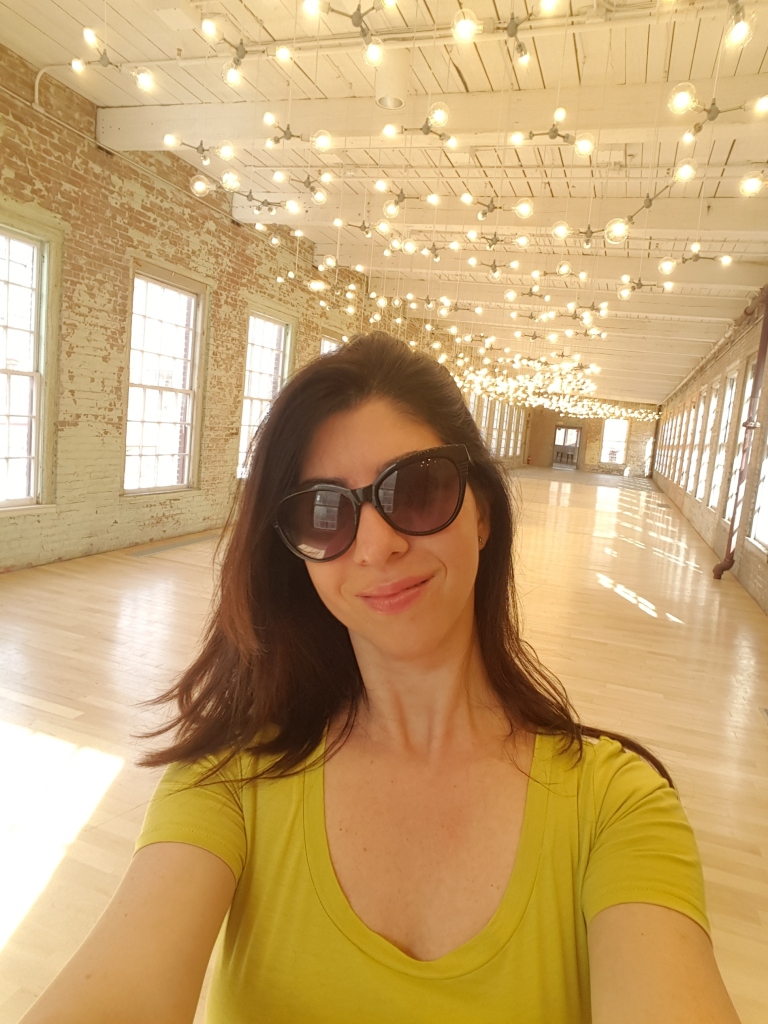 Spencer Finch, the subject of a major mid-career survey at MASS MoCA in 2007 titled What Time is it on the Sun?, returns to the museum in May 2017 with a long-term installation commissioned and designed in conjunction with MASS MoCA’s Phase III expansion. Bringing the starry night inside the museum, Finch’s light-based work, Cosmic Latte features over 150 specially fabricated LED fixtures that will be suspended from the ceiling over an expanse of the 80-foot long gallery. The constellation of LEDs will be arranged in the gently arching shape of the Milky Way as it is observed in the Northern Hemisphere in March. The work’s title, Cosmic Latte, refers to the name for the average color of the universe, which in 2009 was determined to be more beige than what has been traditionally thought of as blue. Two American astrophysicists studied the color of the light emitted by 200,000 galaxies and created a cosmic spectrum, which they then blended according to the light spectrum visible to human eyes. Finch represents that specific warm, yellowish-white shade of light with LED lights (designed to look like incandescent bulbs), which are then arranged in the shape of the molecular models of the pigments needed to create this “cosmic latte” color: titanium white, Mars yellow, chrome yellow, and a touch of cadmium red. 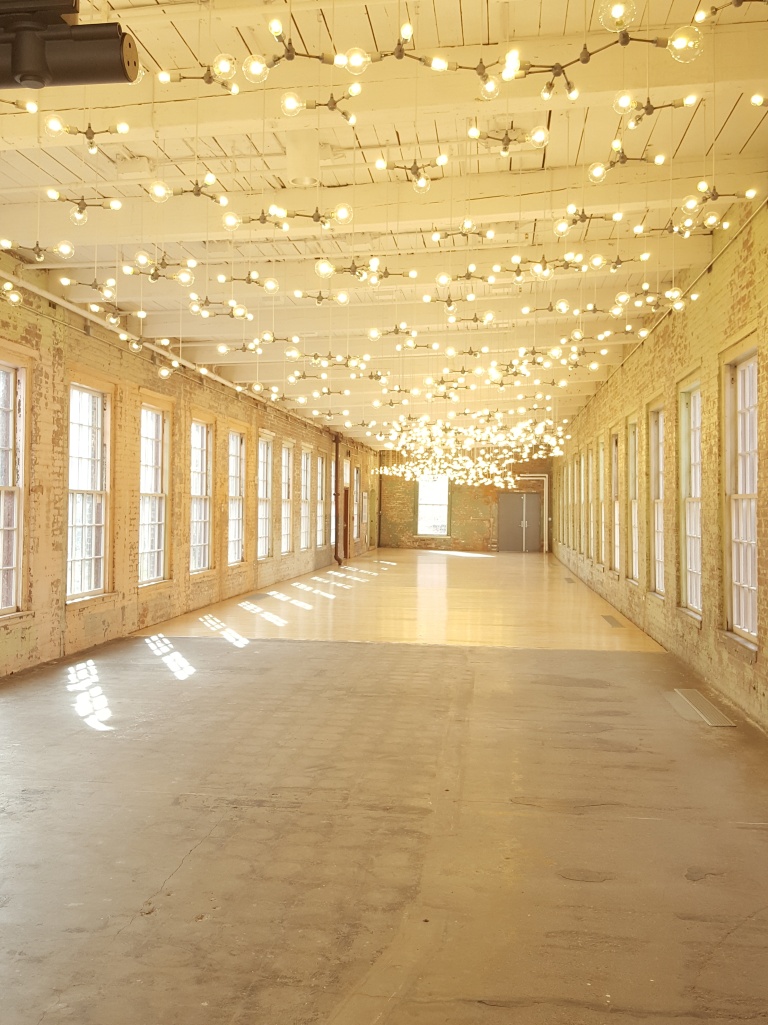 Sol LeWitt—who stressed the idea behind his work over its execution—is widely regarded as one of the leading exponents of Minimalism and Conceptual Art, and is known primarily for his deceptively simple geometric structures and architecturally scaled wall drawings. His experiments with the latter commenced in 1968 and were considered radical, in part because this new form of drawing was purposely temporal and often executed not just by LeWitt but also by other artists and students whom he invited to assist him in the installation of his works.

Each wall drawing begins as a set of instructions or a simple diagram to be followed in executing the work. As the exhibition makes clear, these straightforward instructions yield an astonishing—and stunningly beautiful—variety of work that is at once simple and highly complex, rigorous, and sensual. The drawings in the exhibition range from layers of straight lines meticulously drawn in black graphite pencil lead, to rows of delicately rendered wavy lines in colored pencil; from bold black-and-white geometric forms, to bright planes in acrylic paint arranged like the panels of a folding screen; from sensuous drawings created by dozens of layers of transparent washes, to a tangle of vibratory orange lines on a green wall, and much more. Forms may appear to be flat, to recede in space, or to project into the viewer’s space, while others meld to the structure of the wall itself, like gauze. 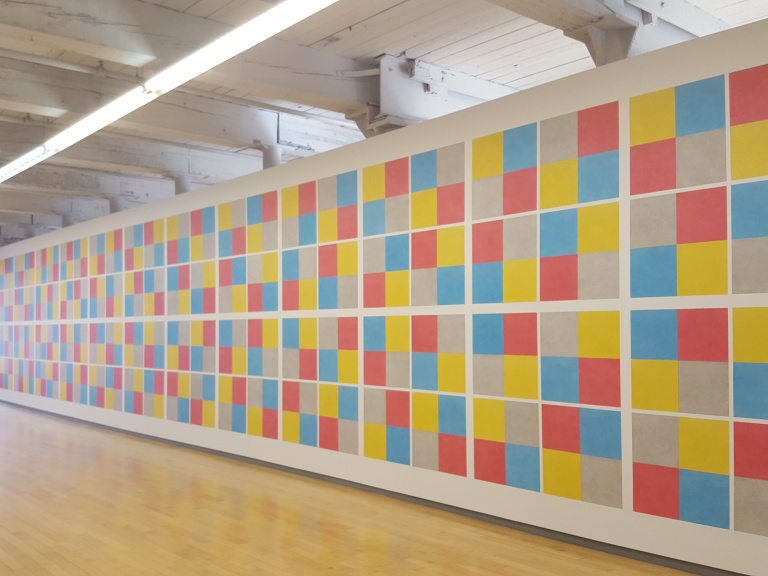 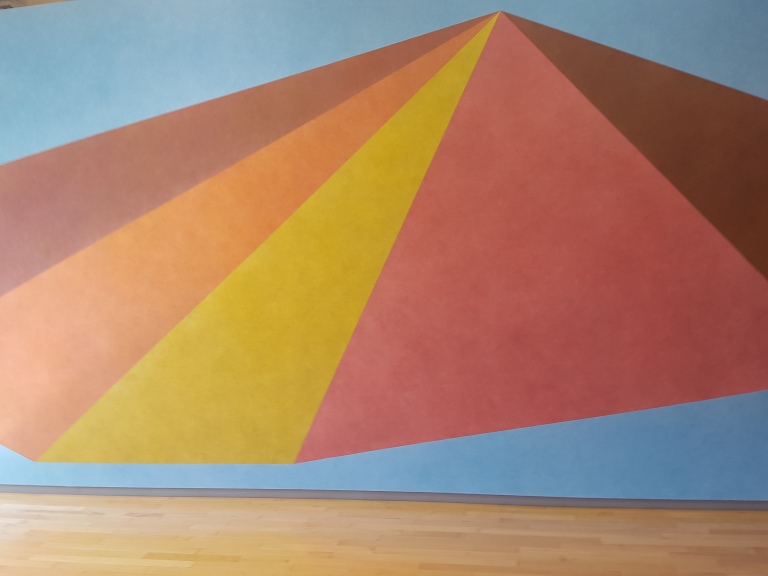 Born in Missouri in 1959, Nick Cave studied at the Kansas City Art Institute and the Cranbrook Academy of Art in Michigan, and trained with the renowned Alvin Ailey American Dance Theater. His solo work has been exhibited at the Institute of Contemporary Art, Boston; the Denver Art Museum; and the Peabody Essex Museum, Salem, MA. Cave’s work is included in public collections of the Brooklyn Museum; Crystal Bridges Museum of American Art; the High Museum; the Hirshhorn Museum and Sculpture Garden; the Museum of Modern Art, New York; the Museum of Fine Arts, Boston; and the Smithsonian Institution. Cave teaches at the School of the Art Institute of Chicago and is represented by Jack Shainman Gallery, NY. A paradisiacal landscape where [black-faced lawn] jockeys appear — made from the crystals that would normally go into chandeliers, on a raised platform accessible via four ladders — is the heart of “Until.” “I had been thinking about gun violence and racism colliding,” Mr. Cave said. “And then I wondered: Is there racism in heaven? That’s how this piece came about.” Read the full profile in The New York Times.

The sheer volume of material that has been gathered is astounding — 16,000 wind spinners; millions of plastic pony beads; thousands of ceramic birds, fruits, and animals; 13 gilded pigs; more than 10 miles of crystals; 24 chandeliers; 1 crocodile; and 17 cast-iron lawn jockeys.

Until begins with a dense sculptural field of metallic lawn ornaments leading to a crystal cloud topped by a private garden populated with birds, flowers, and black-face lawn jockeys, finally coming to rest before a cliff wall hand-woven with shoelaces and hundreds of thousands of colorful pony beads. This is an active space where alluring kinetics and a sumptuous, overwhelming materiality give way to stark images of guns, bullets, and targets, positioning us all as culpable, vulnerable, and potentially under attack. The aim of this is pointed, questioning us to spark discussion about important issues in a space that is at once dazzling, provocative, and — ultimately — optimistic. Cave believes in humanity, celebrating possibility while also creating a forum for critical discussion that eventually provokes the question, “Is there racism in heaven?”

Cave has come to see himself as a messenger, endeavoring to coalesce communities, discuss important issues, and ultimately heal through art. “I view this work as an elaborate community forum, as much as a work of sculpture,” notes Cave. As such, the gallery will double as a stage for internationally known dancers, singer-songwriters, pop artists, poets, and composers, together with panel discussions, community forums, and other forms of creative public debate and engagement. 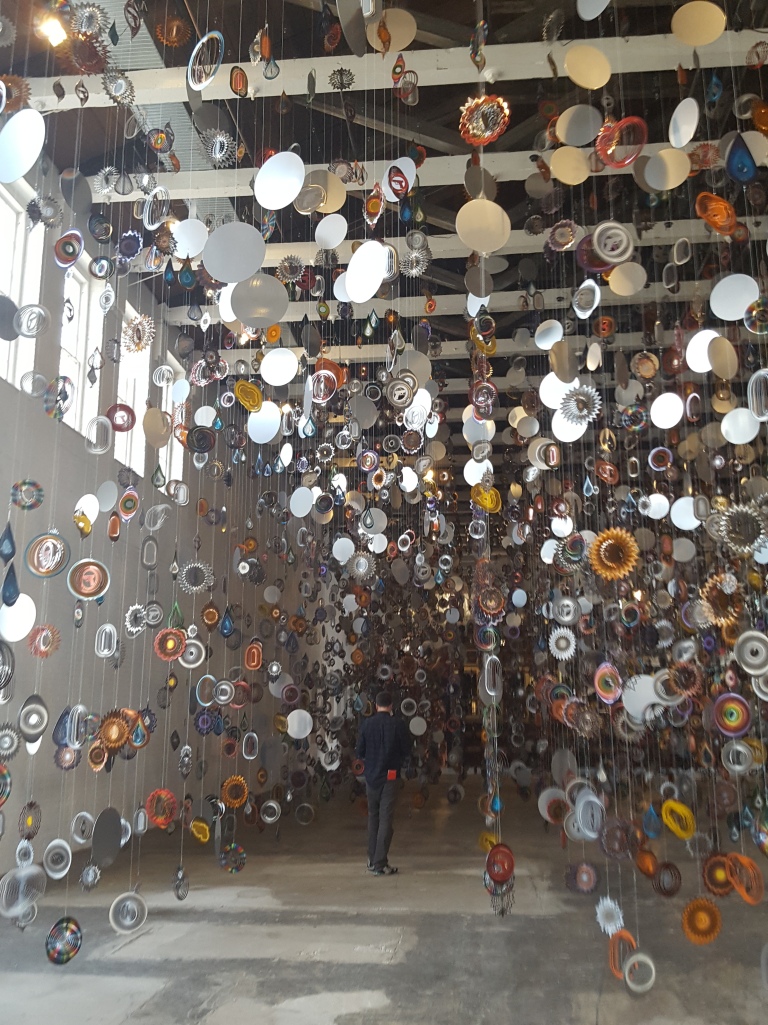 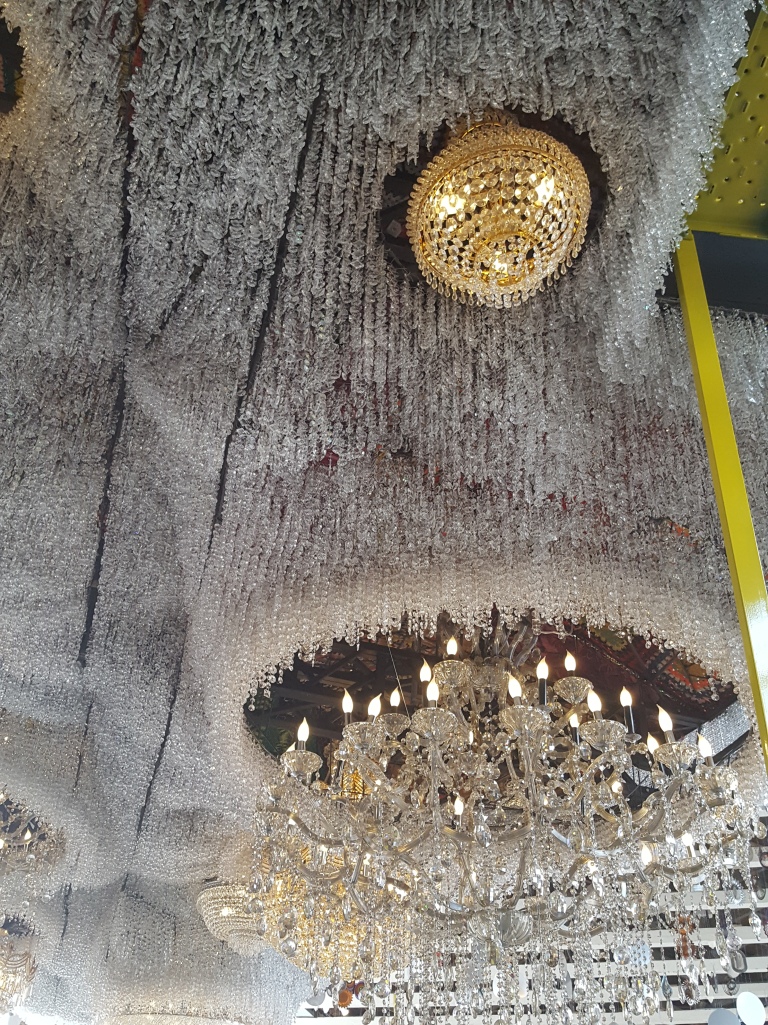 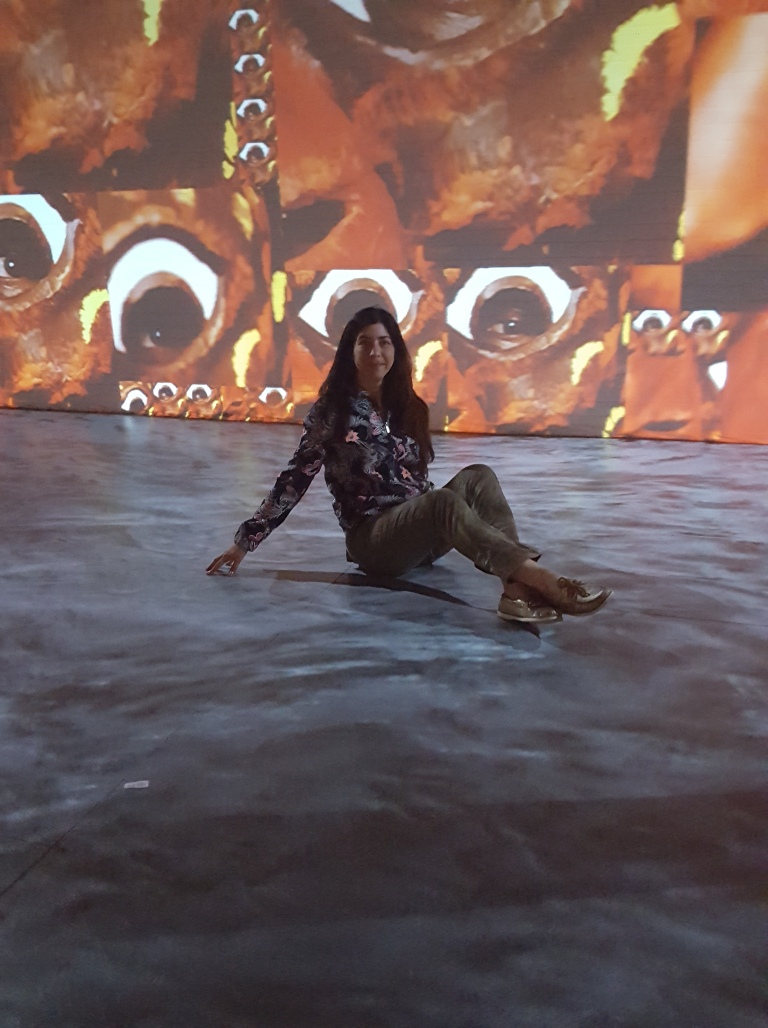 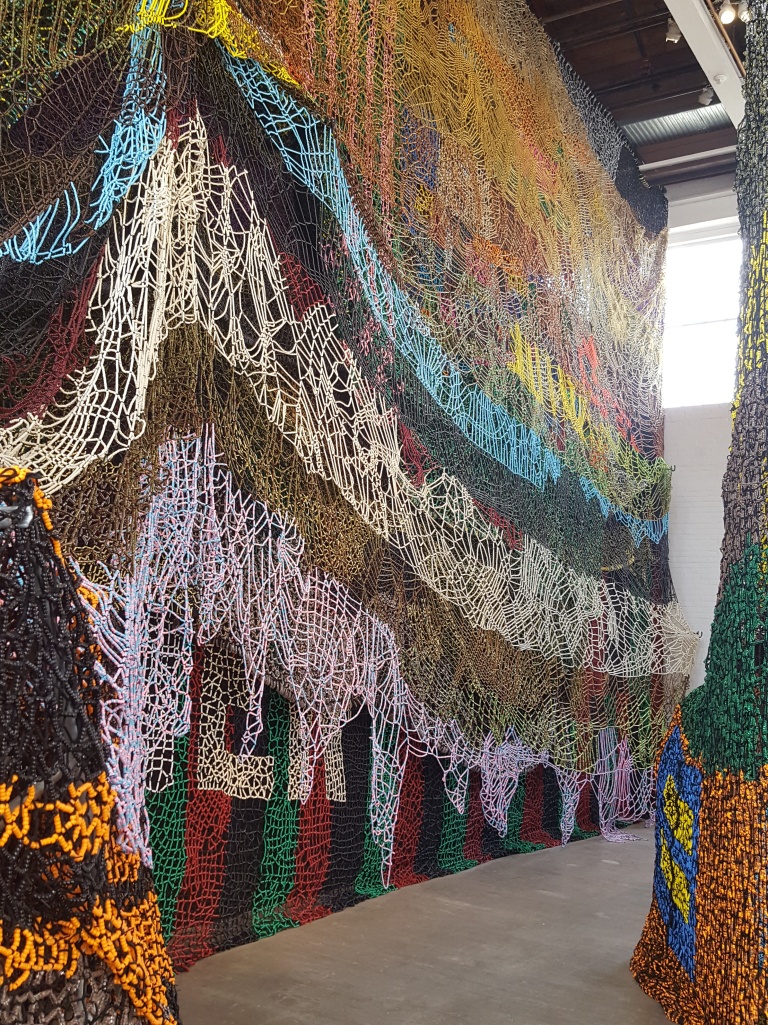 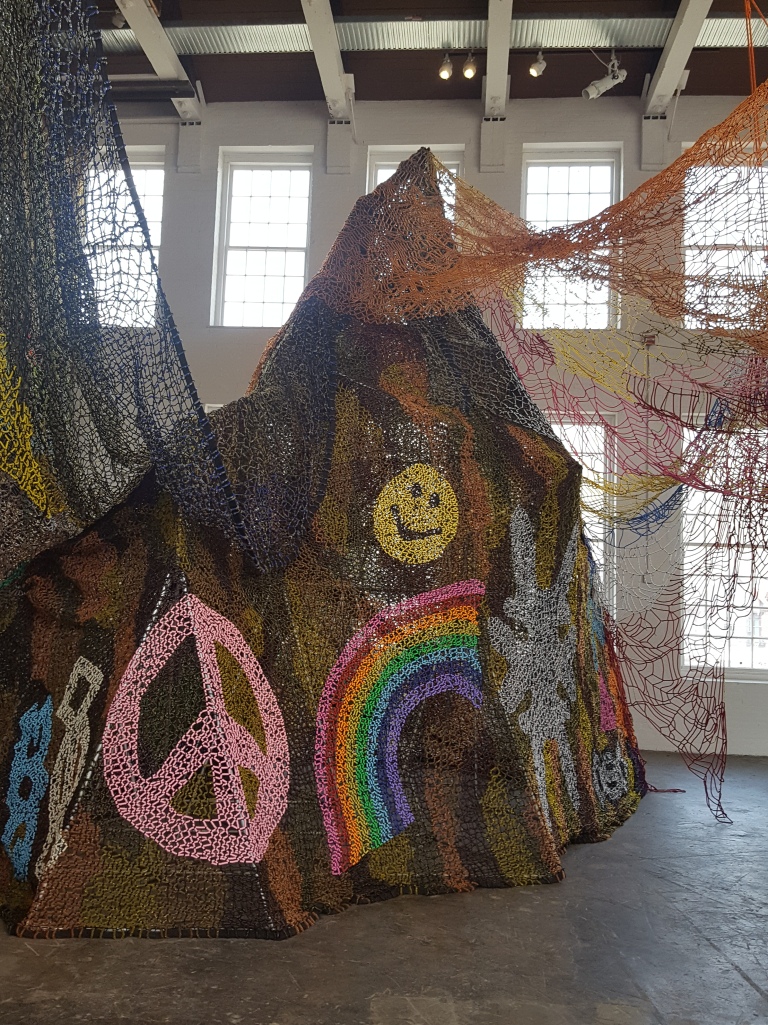 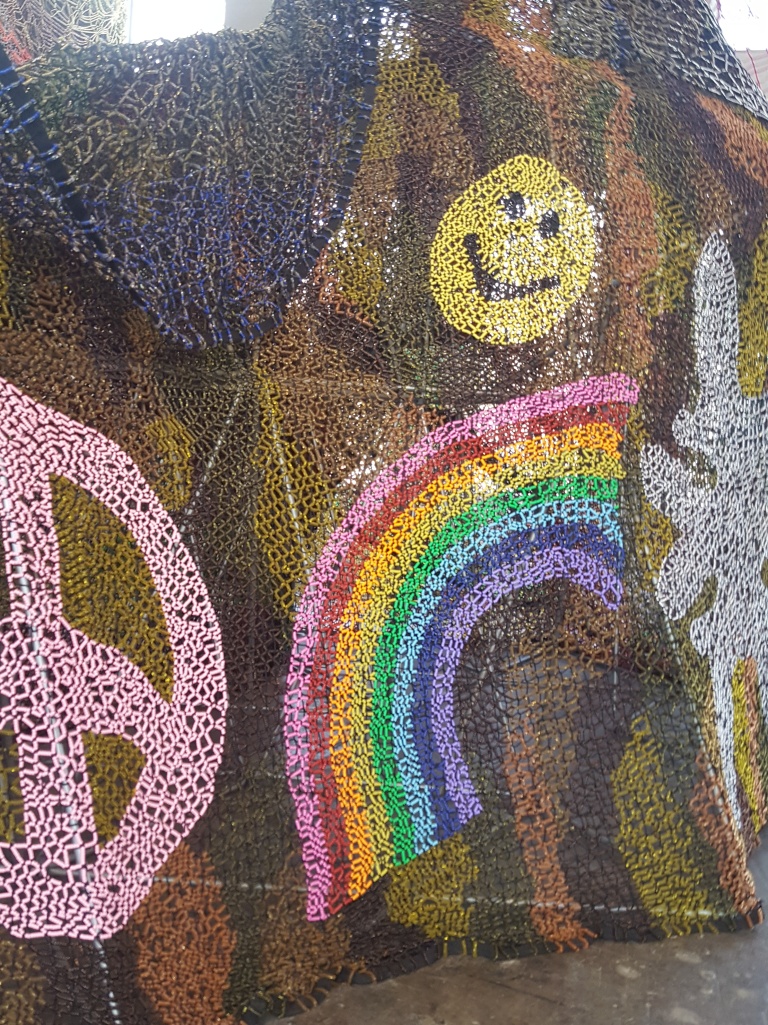 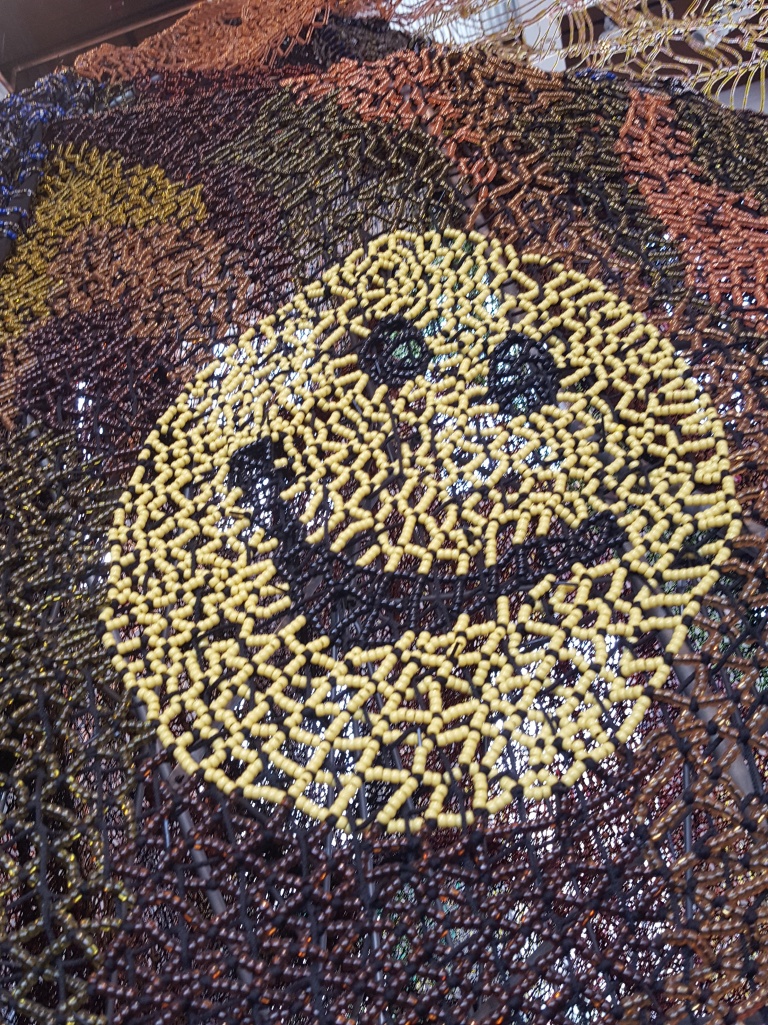 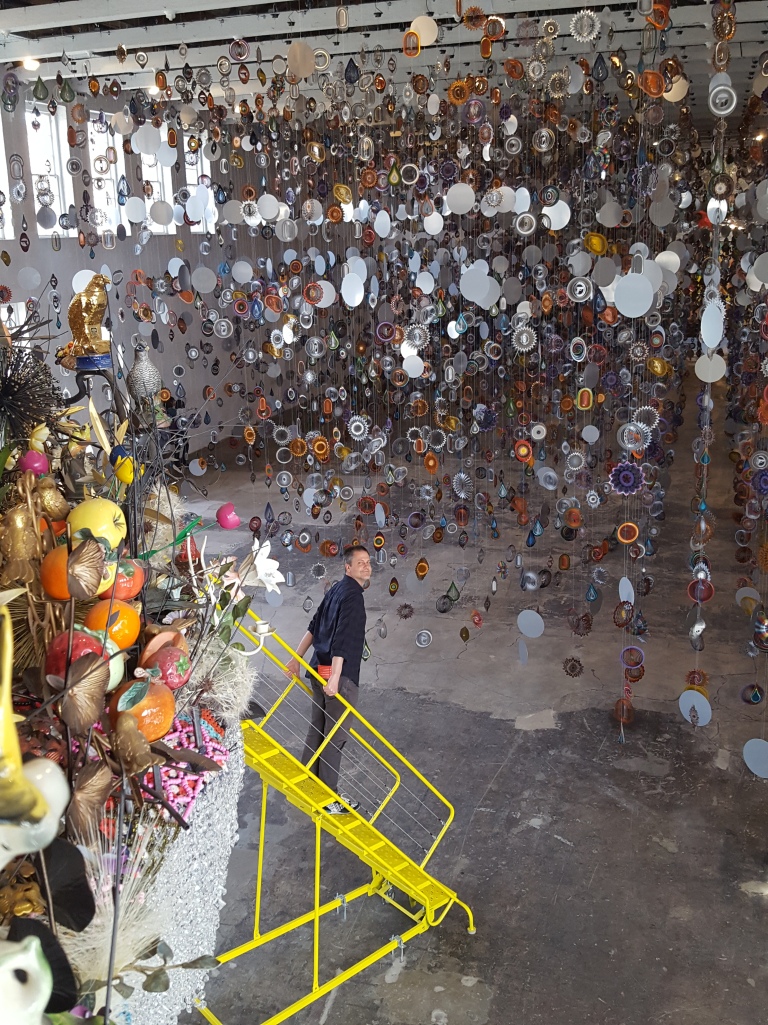 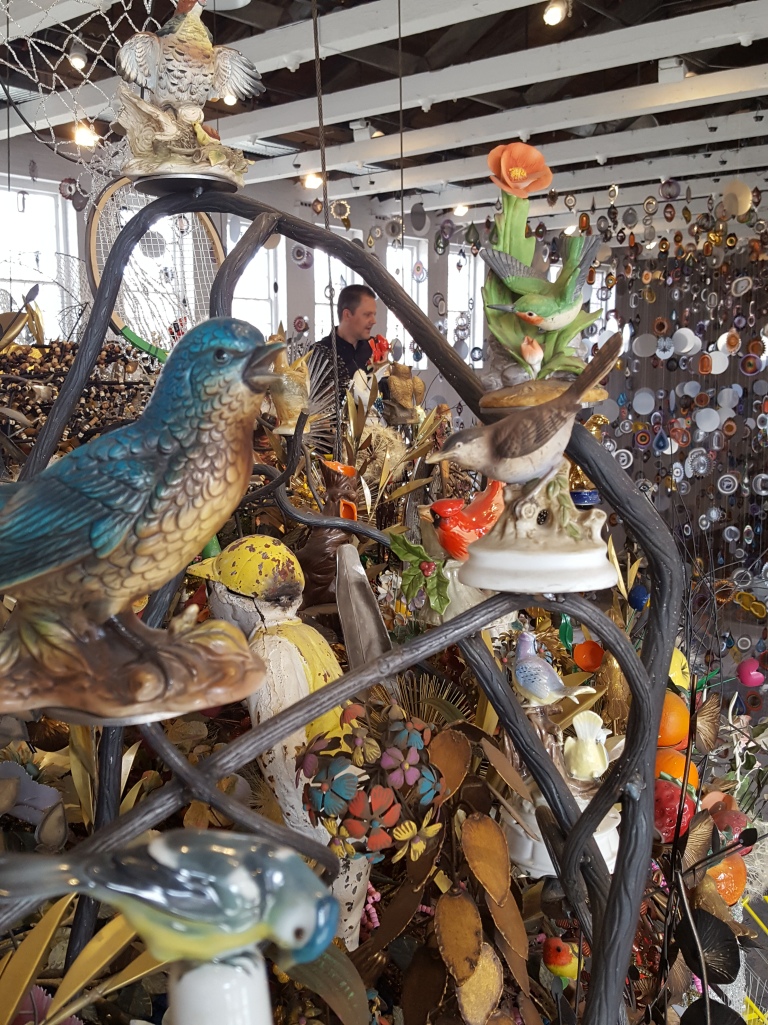 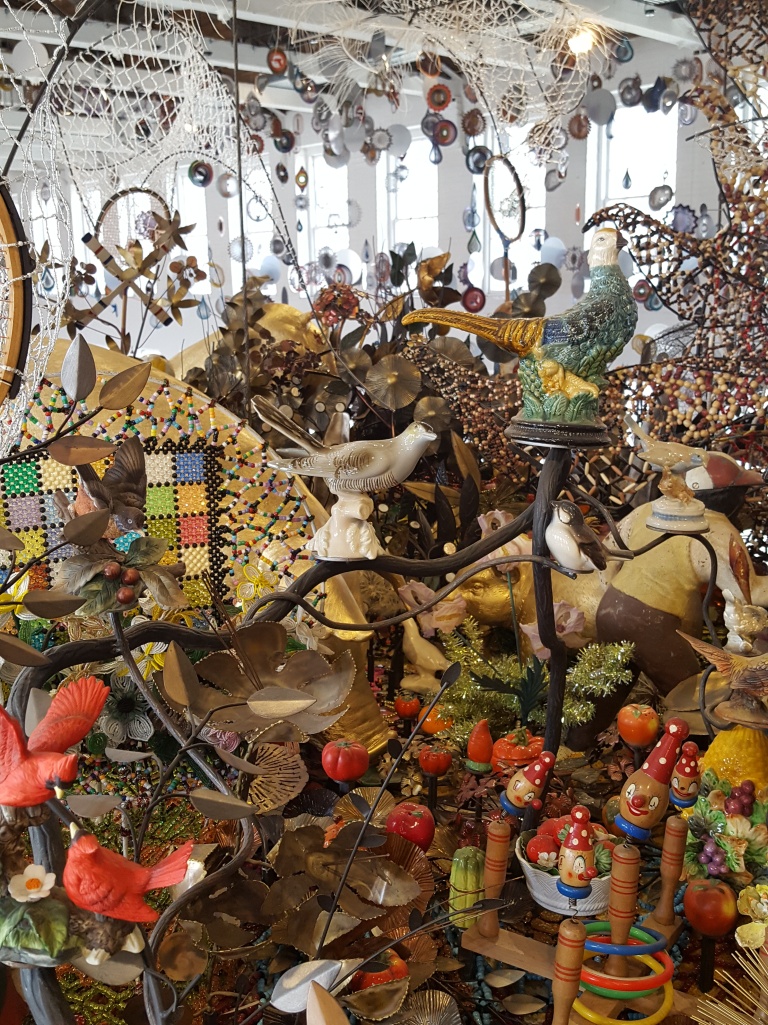 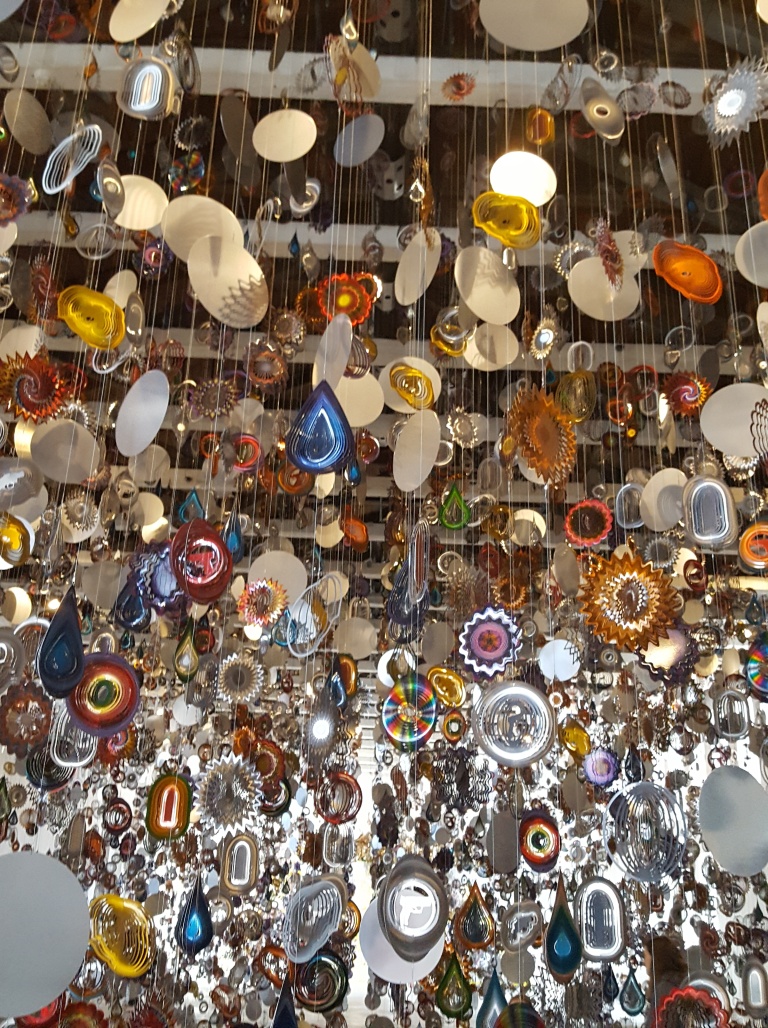 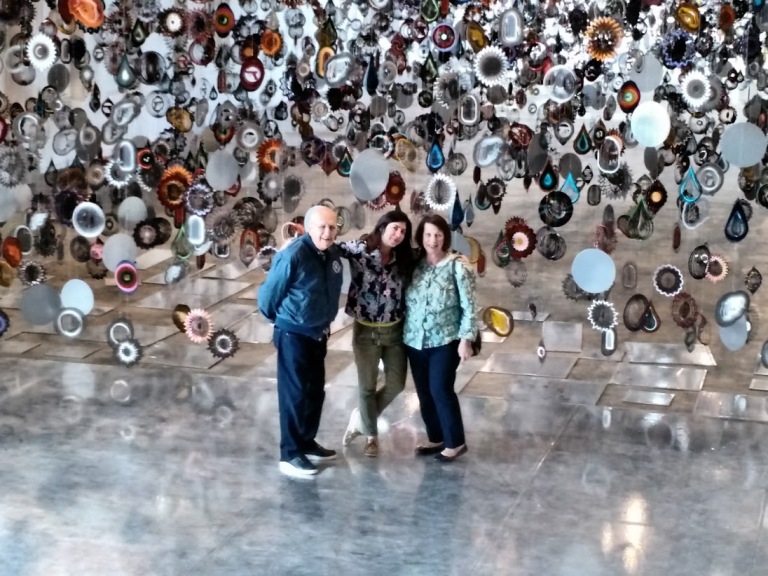 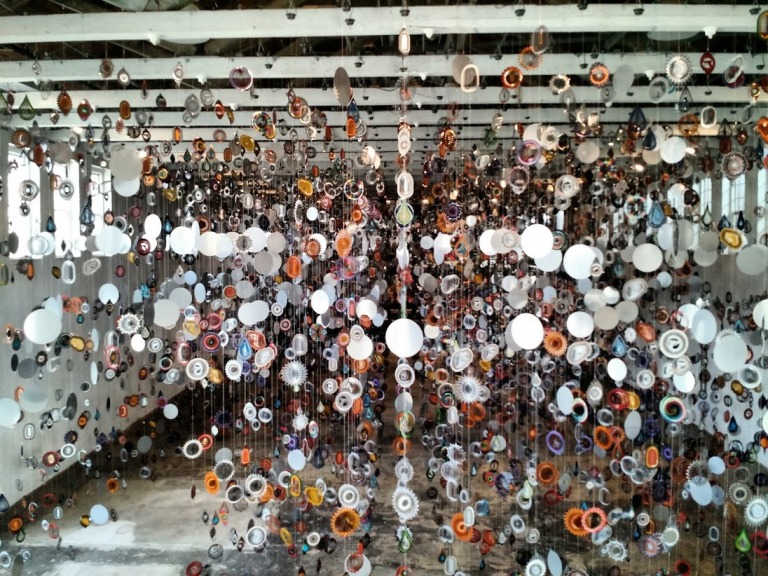